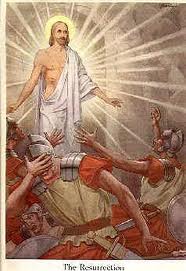 “But we all saw the same thing, right? His countenance was like lightning, and his clothing as white as snow.”

“Well, the priests want us gone and this story with us. Here’s a bag of loot for each of us. Anyone asks, His boys came and stole the body. After that, we didn’t see nothin’.”

Mary Magdalene, Mary the mother of James, and Salome bought spices, to anoint Jesus’ body that Sunday at sunrise. There was a “duh” moment when they realized they didn’t have anyone along who could roll back the stone.

“A glowing man said He’s risen and we should go tell the guys! See for yourself!”

“They’re gonna throw us out, if we start talking this stuff.”

So they went out quickly and fled from the tomb, for they trembled and were amazed. And they said nothing to anyone, for they were afraid.

“Because they have taken away my Lord, and I do not know where they have laid Him.”

“Mary! No hugs yet, but tell the guys you saw Me and to wait for Me.”

Mary Magdalene came and told the disciples that she had seen the Lord, and that He had spoken these things to her.

Easter morning definitely pegged the weirdness meter! A brutally murdered man came back to life, and threw a squad of Roman Soldiers on the ground with no more than a look and a word. They had to be bribed to hush up something so weird it shouldn’t have needed hushing up! Which tells us, but the way, that the priests who bribed them bought the whole story.

It was so weird that the first visitors to the tomb went back to the disciples, whistling, nonchalant, not having seen nothin’.

Except Mary Magdalene who was delivered by Jesus of seven demons. Her Weirdness Meter had been properly calibrated earlier.

Here’s the thing; as weird and even as scary as Easter morning was for the people who went through it, it was real enough and important enough that countless people since have died for that truth, weird as it felt that morning.

Dying for a magic trick, a “Now-you-don’t-see-me-now-you-do” David Copperfield act? Now THAT would be weird!! No, my friends, it happened!