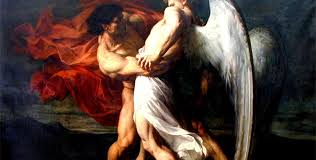 Then Jacob was left alone; and a Man wrestled with him until the breaking of day. 25 Now when He saw that He did not prevail against him, He touched the socket of his hip; and the socket of Jacob’s hip was out of joint as He wrestled with him…And (God) said, “Your name shall no longer be called Jacob, but Israel; for you have struggled with God and with men, and have prevailed.” Genesis 32:24-25, 28

Jacob; schemer, deceiver, always looking for an angle. Why, that arrogant little $^%&* would wrestle God Himself!

In fact, he did! The verses above are part of the account of God visiting Jacob in the night. The two wrestled all night long, and Jacob would not give in.

I know…the Creator and Supreme Ruler of the Universe did not lose a match to a mere human being. Still, He was mighty impressed that Jacob wouldn’t back down. Finally, He touched Jacob’s hip – just touched it – and put it out of joint.

Here’s where it really gets impressive. Jacob knows Who he’s tussling with. His hip just got dislocated, but he STILL won’t give in.

That, my friends, is a serious set of cojones! The man wrestles with God, who lets him think he’s getting somewhere. This goes on all night. The man, like a child who doesn’t know when the game is over, won’t let it go. God puts a serious move on him just to remind him of Who is who, dislocating his hip in the process, and the man still says this isn’t over yet. Not till I get a blessing from You.

God asks him his name, and he tells God. God replies, “Not any more.” New name? ISRAEL, Prince with God!

This, friends, is huge. Understand the use of the term “Prince” in the Bible. It is normally used in association with heavenly beings. Satan is the Prince of the World. Daniel refers to Satan’s Princes of the world, each with its own geographic territory. Unfallen angels are also referred to as princes, each with their own assigned duties. Recall that there is a special class of angels called “Watchers,” for example. Jesus is called the Prince of Peace.

When God calls Jacob “Prince with God” He is making a serious, universe-shaking pronouncement! He is not a prince of God, but a prince with God. Jacob is being elevated to virtually angelic status. If that sounds like a stretch too far, recall David saying this in Psalm 8:5 – For You have made him a little lower than the angels, And You have crowned him with glory and honor.

“A little lower than the angels.” Jacob is getting a promotion. Why? Because he will produce the Twelve Tribes of Israel through whom God will bring His own Prince of Peace into the world and save all of humanity in every time; past, present, and future.

Just as the Watchers are charged with watching over humanity, Jacob and his progeny are charged with being the sacred bloodline that will not just watch over humanity, but save humanity! If you still think that’s a stretch, consider Isaiah’s prophecy concerning the eternal place of the house of Israel with God. Isaiah 60:16-22 –

You shall drink dry the milk of the Gentiles, And milk the breast of kings; You shall know that I, the Lord, am your Savior And your Redeemer, the Mighty One of Jacob.

17 “Instead of bronze I will bring gold, Instead of iron I will bring silver, Instead of wood, bronze, And instead of stones, iron. I will also make your officers peace, And your magistrates righteousness. 18 Violence shall no longer be heard in your land, Neither [a]wasting nor destruction within your borders; But you shall call your walls Salvation, And your gates Praise.

God the Glory of His People

19 “The sun shall no longer be your light by day, Nor for brightness shall the moon give light to you; But the Lord will be to you an everlasting light, And your God your glory. 20 Your sun shall no longer go down, Nor shall your moon withdraw itself; For the Lord will be your everlasting light, And the days of your mourning shall be ended. 21 Also your people shall all be righteous; They shall inherit the land forever, The branch of My planting, The work of My hands, That I may be glorified. 22 A little one shall become a thousand, And a small one a strong nation. I, the Lord, will hasten it in its time.”

And so it begins… 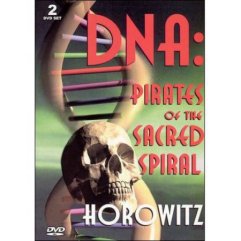 The Rockefellers have been and continue to be part of the eugenics movement; population control and elimination of “undesirable” populations. Lest there be any doubt about this, their company engaged in such horrendous, pro-Nazi behavior that then Senator Harry Truman described their role regarding Hitler’s regime as “treasonous.”  He was quite correct per the Constitution of The United States of America.

On September 22, 1947, Federal Judge Charles Clark issued against the Rockefellers in a civil case brought against Standard Oil. From his ruling, they…

“…can be considered an enemy national in view of its relationship with I.G. Farben after the United States and Germany had become active enemies.” Pg. 267

“Two months later, merely days before the Rockefeller-controlled United Nations voted on the question of a Jewish “promised land,” David Ben-Gurion, and other Jewish intelligence officers, entered Nelson Rockefeller’s office. They “arrived with their dossier” of incriminating proof that he had personally “committed treason against The United States of America…They had his Swiss bank records with the Nazis, his signature on correspondence setting up the German cartel, transcripts of his conversations with Nazi agents during the war, and finally, evidence of his complicity in helping Allen Dulles smuggle Nazi war criminals and money from the Vatican to Argentina.”

They blackmailed him into swinging the decisive South American vote at the United Nations to establish the state of Israel! 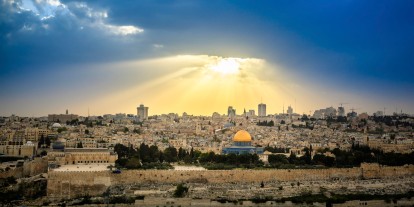 Isn’t it ironic that God, in his infinite Power, established the long-promised re-emergence of the nation of Israel, using the vote of its enemies to seal the victory!

Unfortunately, the Rockefellers fell back, regrouped, and plowed ahead as they have always done. They never accept defeat; they just learn from their mistakes, improve their methods, and renew their efforts.  See Part 8 and the timeline entry for 1940.

They became masters of propaganda. The Rockefeller-Farben partnership directed the Sloan and Kettering foundations to not only pursue the development and promotion of highly ineffective and risky chemotherapy, but they permeated America with their lies directly through their mailboxes.

But their efforts didn’t end there. They granted funds to famous propagandists to write books, spinning stories that would benefit their ends.  One was The Hot Zone by Richard Preston who is a known CIA affiliate.  I read that book when it came out many years ago and was fascinated by the tale.  It posits that AIDS actually came from a huge, bat-infested cave in Africa where monkeys were infected with and HIV pathogen amongst the bat guano.  The virus, he wrote, mutates quickly and was passed into humans who hunted monkeys for food.

Next: Nelson Rockefeller’s agents inside the US government.

The chariots of God are twenty thousand, even thousands of angels: the Lord is among them, as in Sinai, in the holy place.    Psalm 68:17

Do you believe that angels exist? Do you believe that they are active in the world today?  You should.  Seeing an angel is not a common thing, but people do see them.  Some coincidences beg a cause, a providence of God and His angels.  They weren’t seen, but their effect was felt.

A recent article from Great Britain shows that seeing angels is more common than we might think: People Who Believe They Have Seen an ANGEL – http://www.dailymail.co.uk/news/article-3981538/I-just-lying-appeared-two-beautiful-beings-wings-dressed-white-Incredible-tales-people-believe-seen-ANGEL.html

I recently saw a documentary about the Israeli war for independence in the 60’s. They defeated the armies of several Arab nations intent on destroying them and denying Jerusalem to them.  There was no way they should have prevailed, but they did.  History has recorded their magnificent victory, but it has left out the testimonials of the defeated Arab forces.

An entire Arab platoon happened upon a couple of lost Israeli soldiers who were certain they would be slaughtered, caught out in the open. As they steeled themselves for a fight to the death, the Arab platoon laid down their weapons and surrendered.  Why?  Because they saw the Israelis backed up by an army of angels.

This sort of thing happened often in that conflict. What’s amazing is that these eyewitness accounts came from the Arabs who surrendered!

The one thing we need to remember as we acknowledge that angels exist and move in our lives is that they are not the source. Some people tend to worship angels or believe in them, stopping there.  Angels come to us from God the Father.  They are His army for our good.  Salvation does not lie with them.

It is good to know ALL of the things God does for us, the entirety of the spiritual world that surrounds us and, indeed, battles over us. We thank God for His love and providence as He sends us His help from Heaven.

21 Also your people shall all be righteous; They shall inherit the land forever, The branch of My planting, The work of My hands, That I may be glorified.

According to the United Nations, the western Wall and the Temple Mount are strictly Muslim sites, and Israel is merely an “occupying power.” And to be clear, the Western Wall is what remains of the second Temple built by Herod the Great.  That temple’s destruction was foretold by Christ in Matthew 24:1-2.

“Then Jesus went out and departed from the temple, and His disciples came up to show Him the buildings of the temple. 2 And Jesus said to them, “Do you not see all these things? Assuredly, I say to you, not one stone shall be left here upon another, that shall not be thrown down.”

So the UN says that even though one of the great Jewish builders, Herod, erected this temple in Jerusalem when it was the recognized capital of Israel, it isn’t theirs. Um…

That is apparently one of many Bible verses the UN is unfamiliar with along with Isaiah Chapter 60. That chapter describes both the rebuilding of Jerusalem after the Babylonian Captivity as well as it’s eternal status.  God favors The Children of Israel IN JERUSALEM for eternity.  So much so that there will be a new Jerusalem, which will come to the Jews at the end.

I’ve actually heard some pastors say that allegiance to Israel is no longer necessary. They served their purpose in being the lineage of Christ, but Isaiah 60 gives the lie to that.

He also went on to say on Twitter “What’s next? A UNESCO decision denying the connection between peanut butter and jelly?  Batman and Robin?  Rock and roll?”

I’m glad that the US “strongly opposed these resolutions.” After siding against Israel on a number of issues under Obama, we at least got this one right.

France, on the other hand, voted for that resolution. Personally, I think that a country which can’t hold its own soil without the US in two – count ‘em – two World Wars should at least shut up about anyone else’s sovereignty.

Any country that voted in favor of this laughable resolution is, according to Isaiah 60, on the wrong side of history and on the wrong side of God. Israel is something like God’s little brother.  He can wrestle them to the ground, give them noogies, and take their dessert, but woe to any other kid on the block who messes with him!

The UN got this one dangerously wrong, and I can’t help wondering how much closer we are to the End Times.

Link to the article: http://www.dailymail.co.uk/news/article-3837427/Blow-Israel-United-Nations-body-passes-resolution-denying-Jewish-link-holy-sites-Jerusalem-giving-Palestinians-victory-cause.html