You can use the many time references in the Bible, working forward from creation and more easily documented historical dates working back from the present to discover that the world, the universe is about 6000 years old. I’ve been creating my own timeline, carefully reading through the Old Testament instead of buying one. I find the exercise rewarding in that I read things I’d forgotten; it’s a nice refresher!

But here’s the problem people bring up that seems to argue against a young creation as opposed to those in the “deep time” camp. How can we see the light from stars that are billions of light years away, if creation is only 6000 years old?

The Bible continues to be supported with new scientific and archeological discoveries while evolution remains an unproven, fragile theory. If you want more information on the latter, see my articles There Were Giants…Part 1 and Science and the Evolution Argument.

My favorite quotations from the Giants article:

Dr. Lyall Watson, famed anthropologist and evolution proponent admits, “The fossils that decorate our family tree are so scarce that there are still more scientists than specimens. The remarkable fact is that all of the physical evidence we have for human evolution can still be placed, with room to spare, inside a single coffin!”

And Time magazine wrote in 1994 that “Yet despite more than a century of digging, the fossil record remains maddeningly sparse. With so few clues, even a single bone that doesn’t fit into the picture can upset everything. Virtually every major discovery has put deep cracks in the conventional wisdom and forced scientists to concoct new theories, amid furious debate.” Concoct!! HA!!

So…where was I? Oh, yeah; the speed of light and the Bible’s primacy in the truth department.

Since God created the heavenly lights for us to tell “times and season,” it stands to reason that He put in play some mechanism that allows us to see those distant lights. Ken ham, in his Answers Book 1, relates a theory based on Einstein’s Theory of Relativity.

Time is relative, therefore the speed of light should be relative. Speed, after all, is expressed as distance over time, i.e. “Miles per Hour.” According to Einstein, time is relative, and our own GPS navigational systems prove this. For those of you who understand the math, see the equations in the screenshot below. Otherwise, you can read this article, Real-World Relativity: The GPS Navigation System. 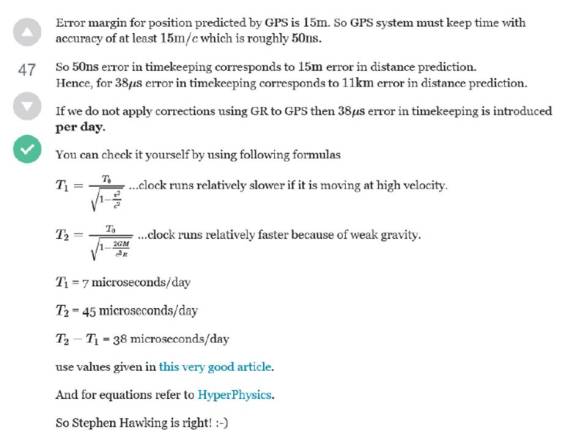 Time flows faster in orbit that on the ground. The further you get from a gravity well, i.e. a planet, the faster time goes. The software in our GPS systems need to account for this or your Garmin would be useless.

Interstellar space has virtually no gravity fields, so speed can theoretically be unlimited. We all know that we are many light years distant from the nearest star, so we can realize that the universe is largely empty.

For example, if two galaxies should cross paths in the universe, the results would not be cataclysmic. In fact, likely nothing would happen. There is so much empty space within a galaxy that the two could cross each other without any of the stars or planets even getting close to each other.

The point? No gravity wells to slow time.

On earth we measure the speed of light as about 186,000 miles per second. In deep, interstellar space? The logical conclusion that Einstein’s Theory of Relativity leads us to is that light from stars billions of light years away actually gets here pretty darn fast. Maybe even almost instantaneously!